Like the original Maverick, the V2 is a compact pepperbox style revolver, chambered in 22 short. The Maverick V2 improves upon the original by altering the grip angle and appearance to be more pleasing, along with adding a linkage to automatically rotate the cylinder when cocking the striker. This allows a much higher rate of fire by operating more like a single action revolver. 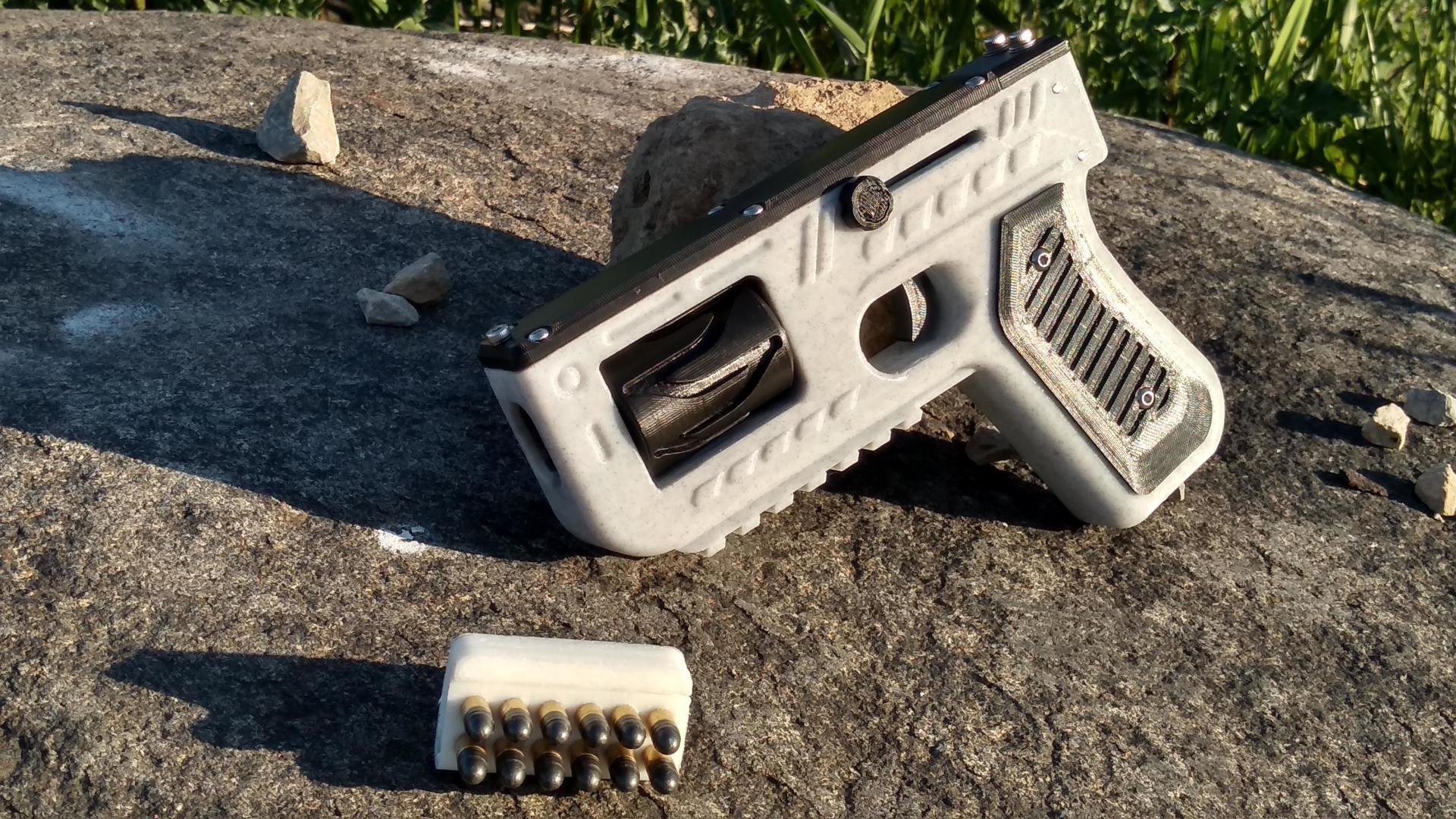 END_OF_DOCUMENT_TOKEN_TO_BE_REPLACED

The GeoBook NB60 – A unique little laptop introduced in the late 1990’s to provide a low-cost alternative to the rising popularity in laptop computers. During this time, an average laptop computer would set you back anywhere from $2-$5k, far too much for the average home user or student to justify. This left a space in the market for ultra budget laptop computers, for those consumers who were not sure how useful a more expensive laptop would be, or for those who simply needed a cheap word-processor for school or personal use.

END_OF_DOCUMENT_TOKEN_TO_BE_REPLACED

The PG22 series is my attempt at a 3D printed firearm. There have been a few variations, each trying to build off the previous ideas which worked. The current iteration, the PG22 Maverick, is a 6-shot .22 short single-action revolver. Functionality is similar to a Pepperbox Revolver.

Thank you for your interest, I will not be publicly sharing the files. 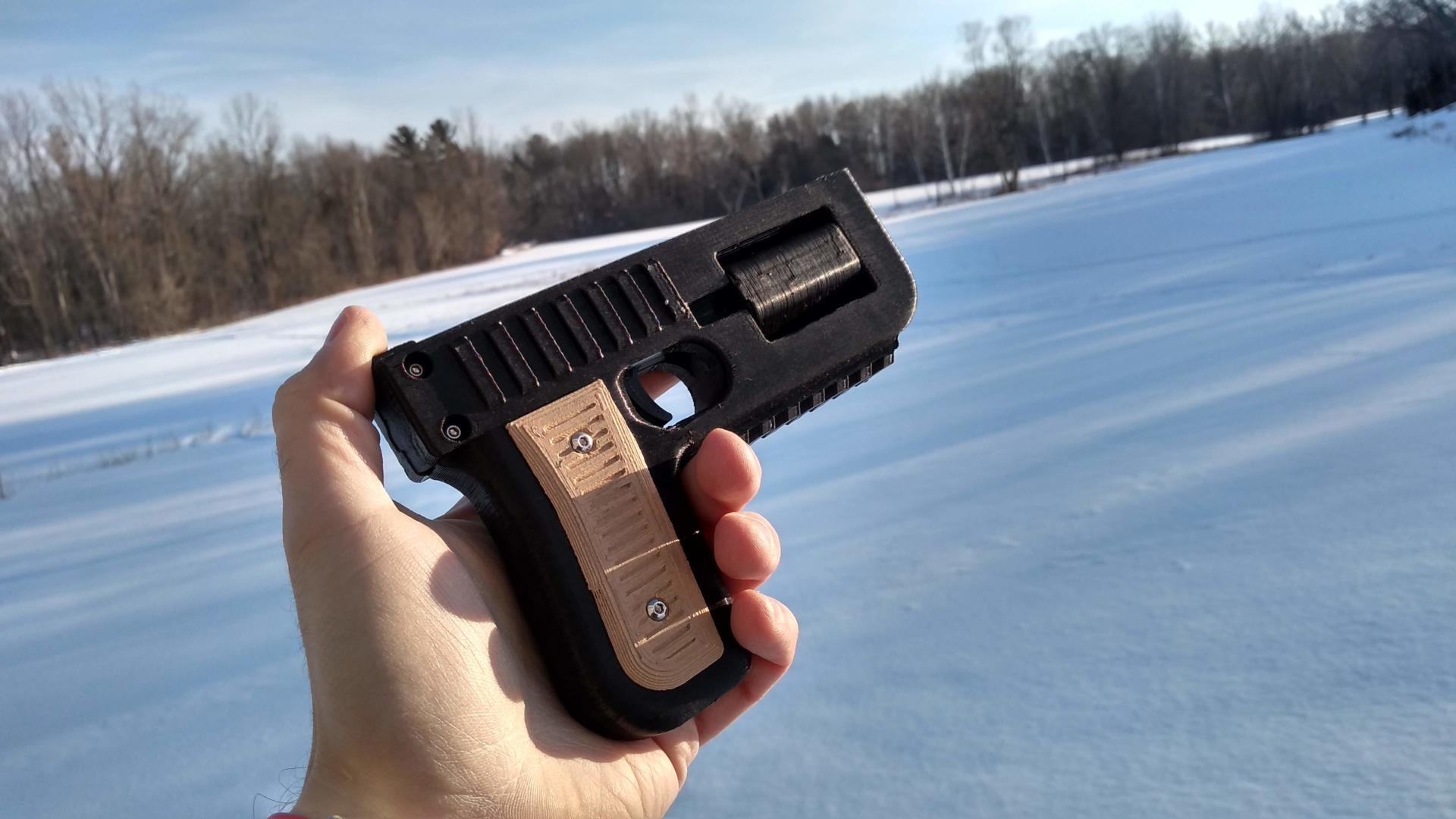 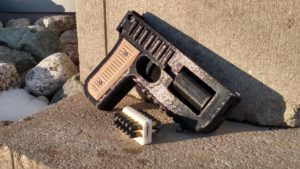 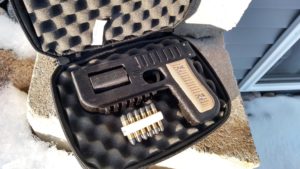 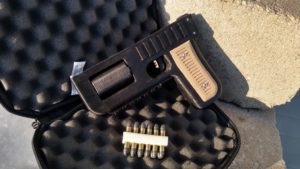 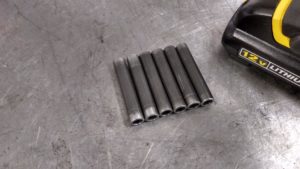 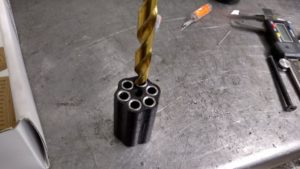 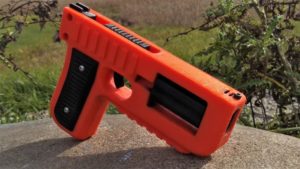 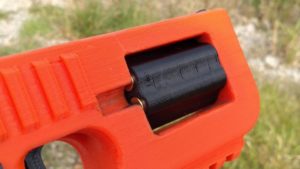 END_OF_DOCUMENT_TOKEN_TO_BE_REPLACED

Well, it all fits together! Just add receiver and a battery, and it could be up and running, though I still want to try making my ESP32 wifi fpv control unit work. Chassis / Cab / Rails print in 3 pieces and snap together, wheels screw on. 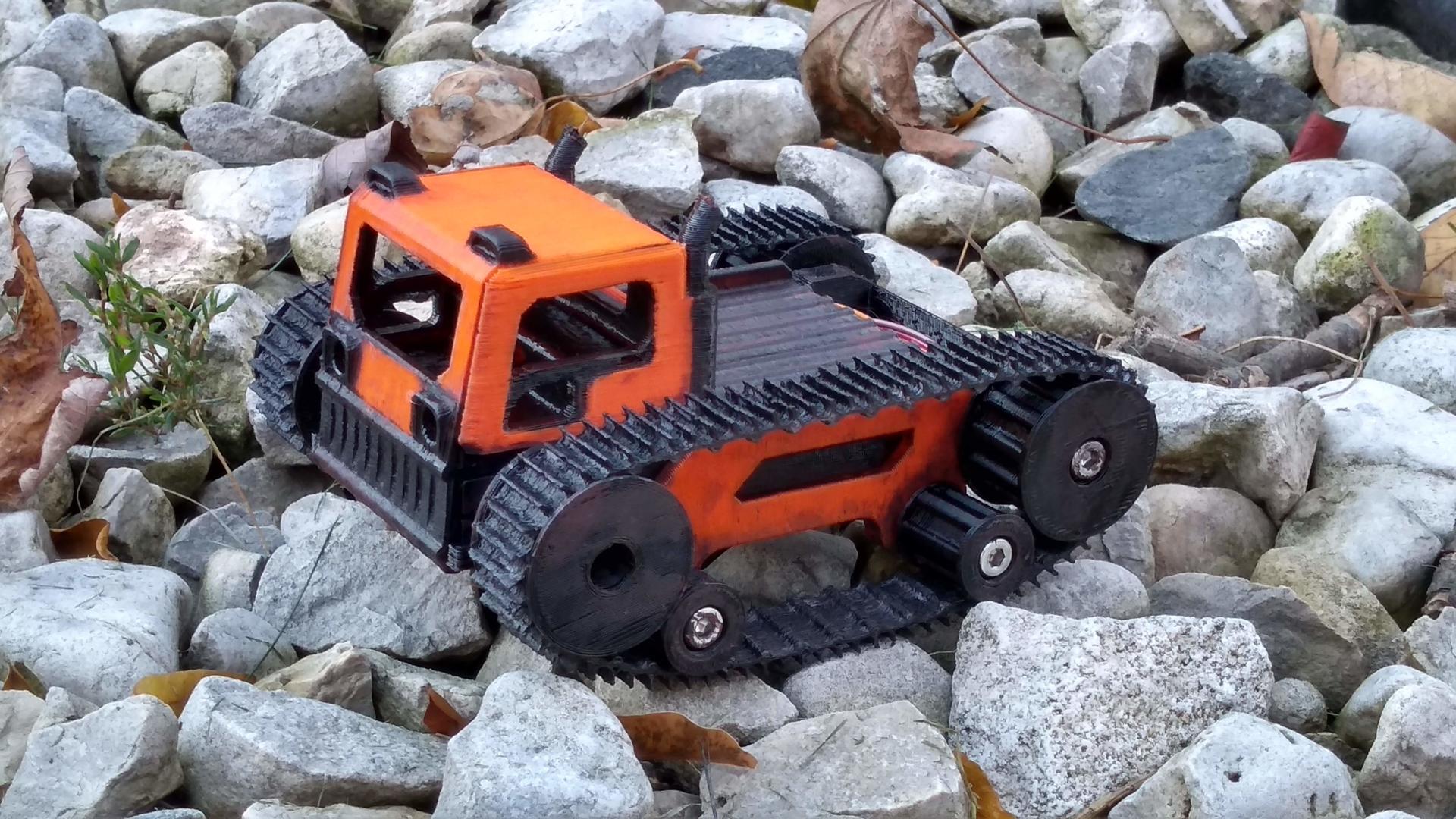 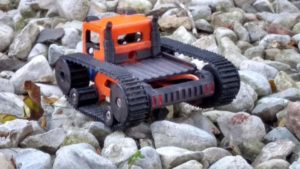 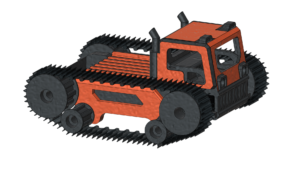 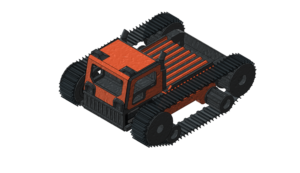 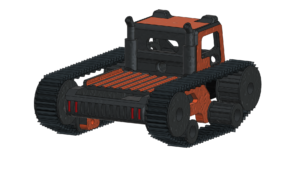 END_OF_DOCUMENT_TOKEN_TO_BE_REPLACED

So I think one of the biggest challenges in getting into a Tiny Trak is cost and complexity. I previously used N20 gearmotors, but the cost of them plus an ESC is a little overwhelming. Not to mention, having to buy hardware / screw kit to assemble. I'm working on a TinyTrak design which will be 100% 3D printable including TPU tracks, without use of screws or tools for assembly. All axles clip into the frame, and all frame parts are designed to snap together. 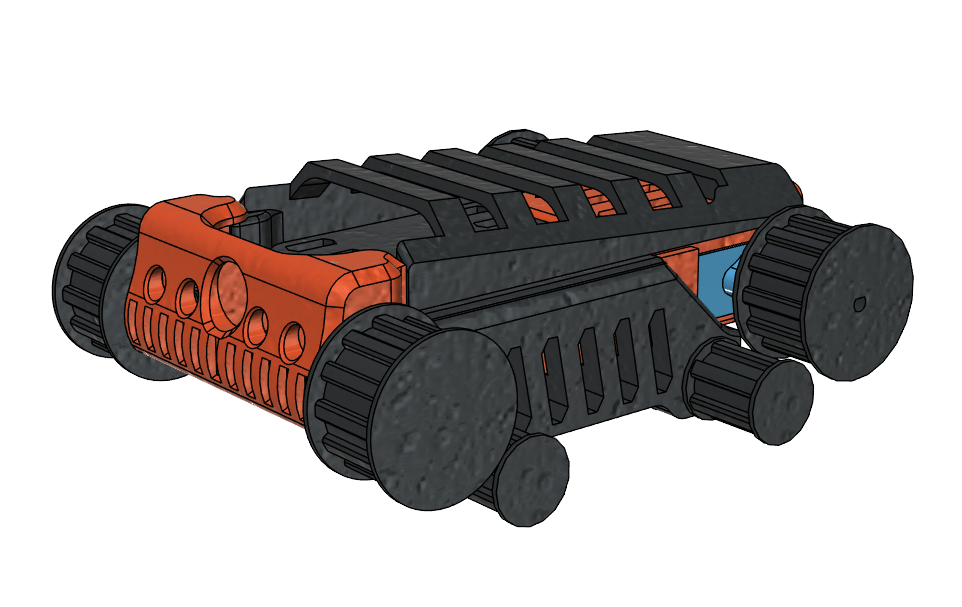 END_OF_DOCUMENT_TOKEN_TO_BE_REPLACED

Still in development, a few light primer strikes, but works mostly okay! Have since lengthened the firing pin to account for variations between cylinders. This isn't designed to be practical or useful (it's neither), more of an engineering challenge to myself. 3D Printed designs are a bit of a challenge for something like a gun, because plastic really doesn't have very good tensile or shear strength, so you have to overbuild components, and carefully design parts that support compressive forces. This generally leads to pretty bulky designs, but with a bit of metal in the right places, a compact design is possible, albeit with less features than a standard revolver. Ammunition is currently only 22 shorts, but a larger frame and a metal insert for the breech face could change that. 22 Shorts are my favorite test ammo because when a part fails, it's usually less catastrophic than larger, more powerful ammo. 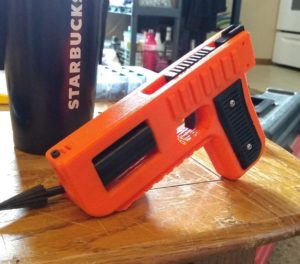 END_OF_DOCUMENT_TOKEN_TO_BE_REPLACED

Autonomous Tiny Trak, a quick and dirty project adding simple autonomous function to one of my PilotTrak platforms. As always, no microcontrollers here, just a simple digital circuit. Sorry to disappoint, there's absolutely no tracking or mapping going on here, he's honestly got the intelligence of a rather bright potato. Easy to make though, all off-the-shelf circuits.

END_OF_DOCUMENT_TOKEN_TO_BE_REPLACED

Should fit a YRC3 transponder without the red casing, with a bit of extra room for servo tape to hold it securely for shock mounting. I created this for refurbishing a transponder that had wires repaired / replaced after breaking off, which is a fairly common problem. 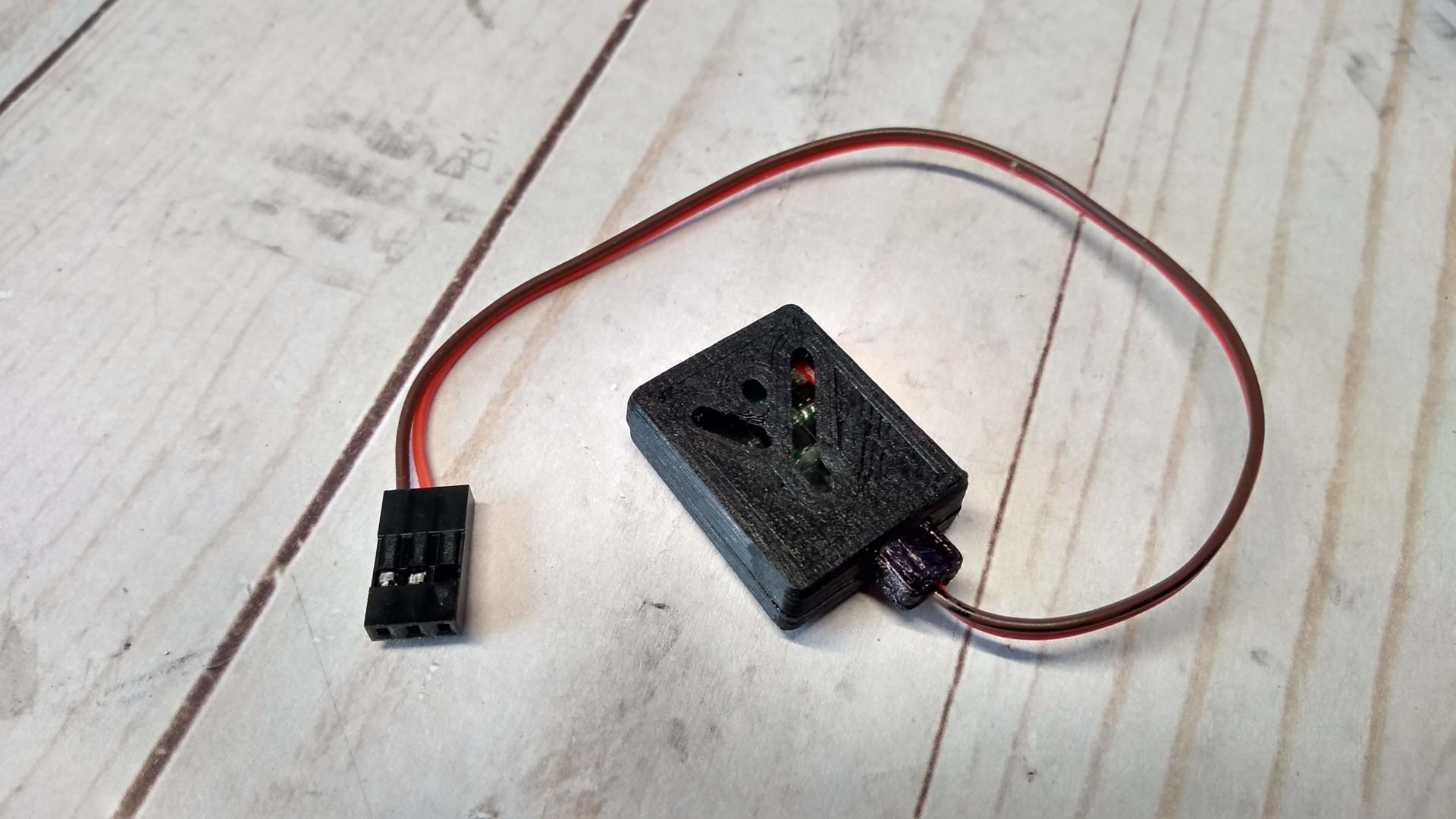 END_OF_DOCUMENT_TOKEN_TO_BE_REPLACED

Based off my larger walker, the Pathfinder Mini is a cost-reduced version which requires far fewer parts, much less plastic, and is a bit more simple to build. I will be releasing the plans for it as soon as I can, and considering the reduced part count, I may be able to sell complete kits instead of my usual plans or plastic-only kits.

If it were economically feasible, I would also like to make a batch of circuit boards to include with the kit. As of right now, it's too complex to build in point-to-point wiring, but a PCB with proper traces would be nice. I'd have to ditch the LEDs as a cost saving measure though as well. Or, you know, I could just use a microcontroller like a sane person.

This circuit was really just a fun project to prove I could build this idea from my head into an actual working robot. It does work quite well, and schematics and an explanation of the design is listed below.